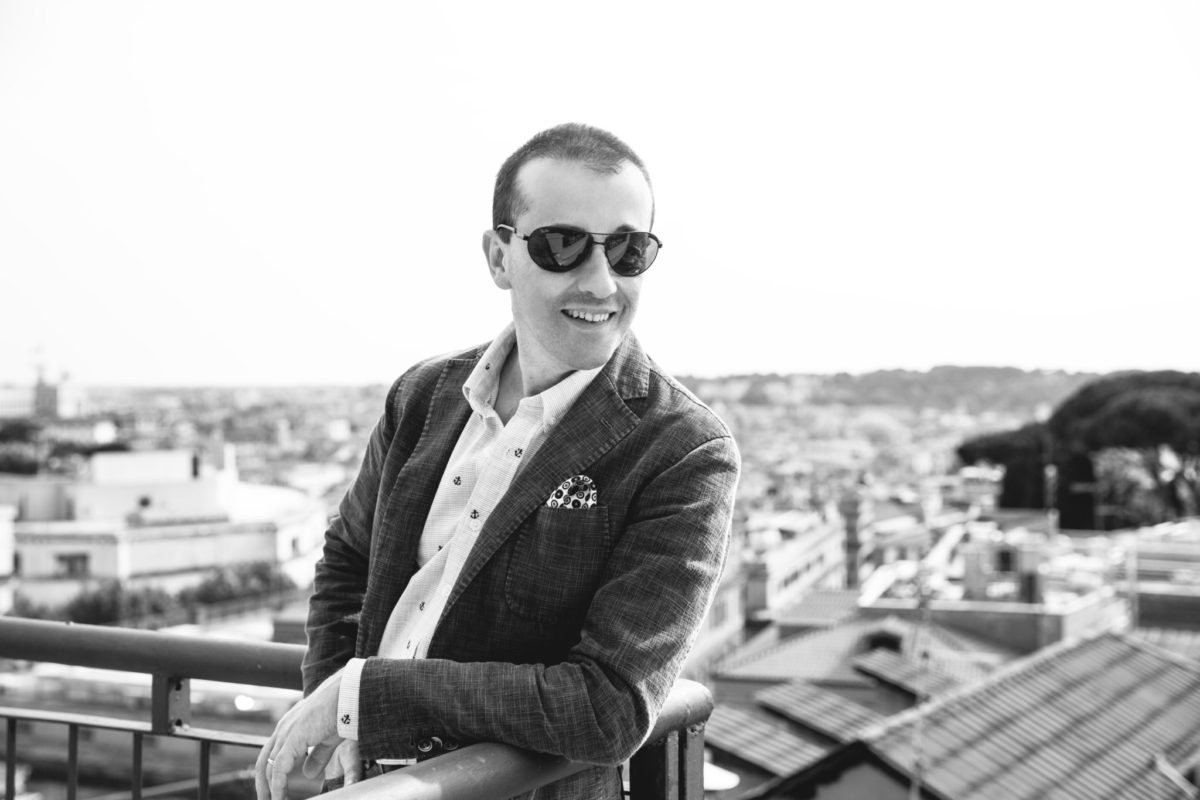 Rome: the most romantic destination of them all. And where better to spend it than in the dreamy, historic Baglioni Regina? Massimo Mainella, General Manager of Baglioni Hotel Regina Rome, is just one of the things that makes this stellar hotel so fabulous. Standing at the hotel historic entrance on Via Veneto, he can’t help but think of the majestic history of the hotel. After King Umberto was assassinated in 1900 by an anarchist outside of Milan, the Queen Mother, Margherita, decided to seek a new home fit for royalty and not too distant from the center of affairs of the state with her newly crowned son, Vittorio Emanuele III. 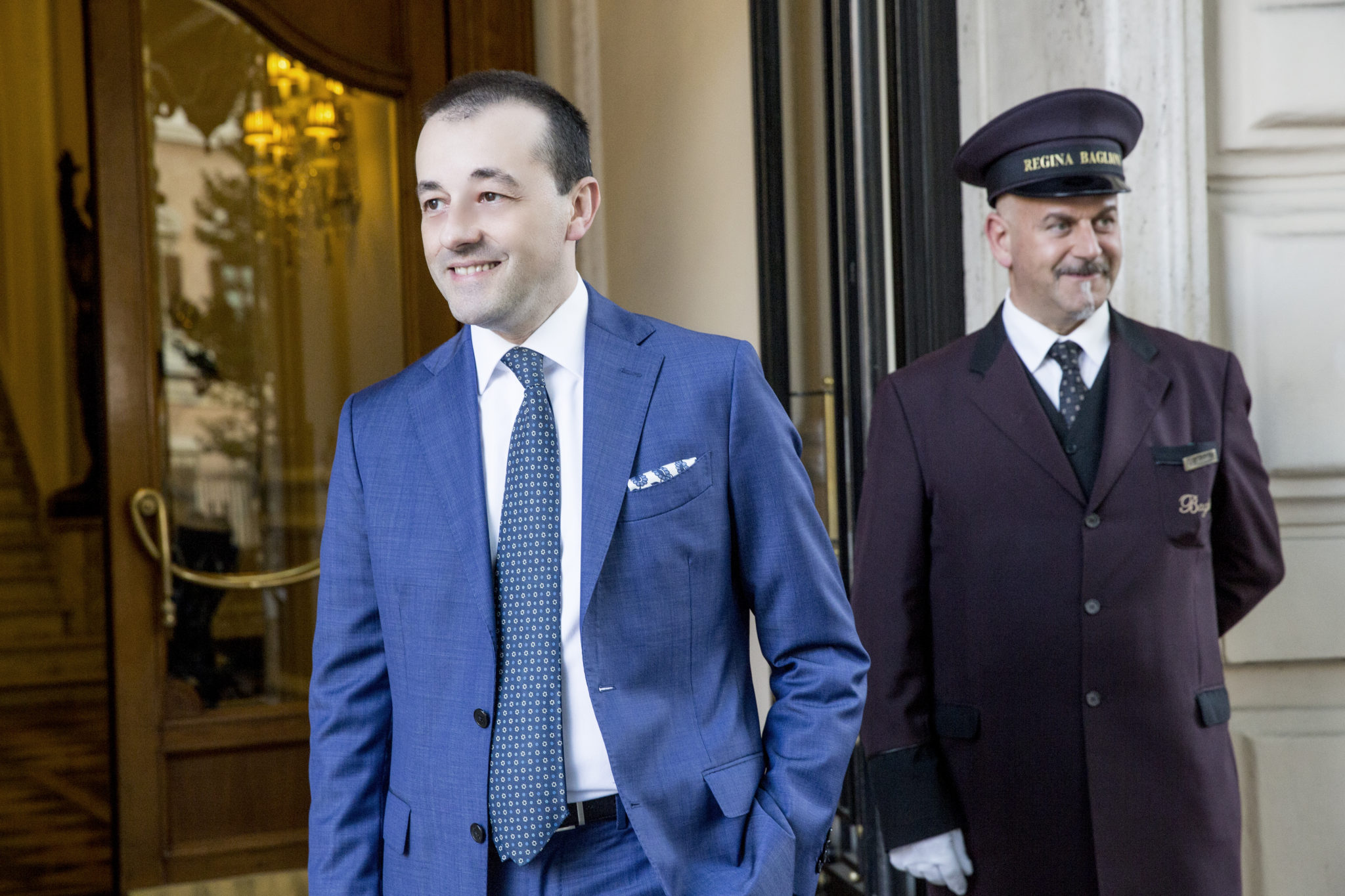 A palazzo in Rome built by the Prince of Piombino, now the American Embassy, was her selection but needed a royal upgrade to meet her standards. In the meantime, she resided in one of the first grand hotels to spring up on Via Veneto, a street that would become world famous in the 1960s as the nexus of La Dolce Vita, possibly Fellini’s most widely respected film. 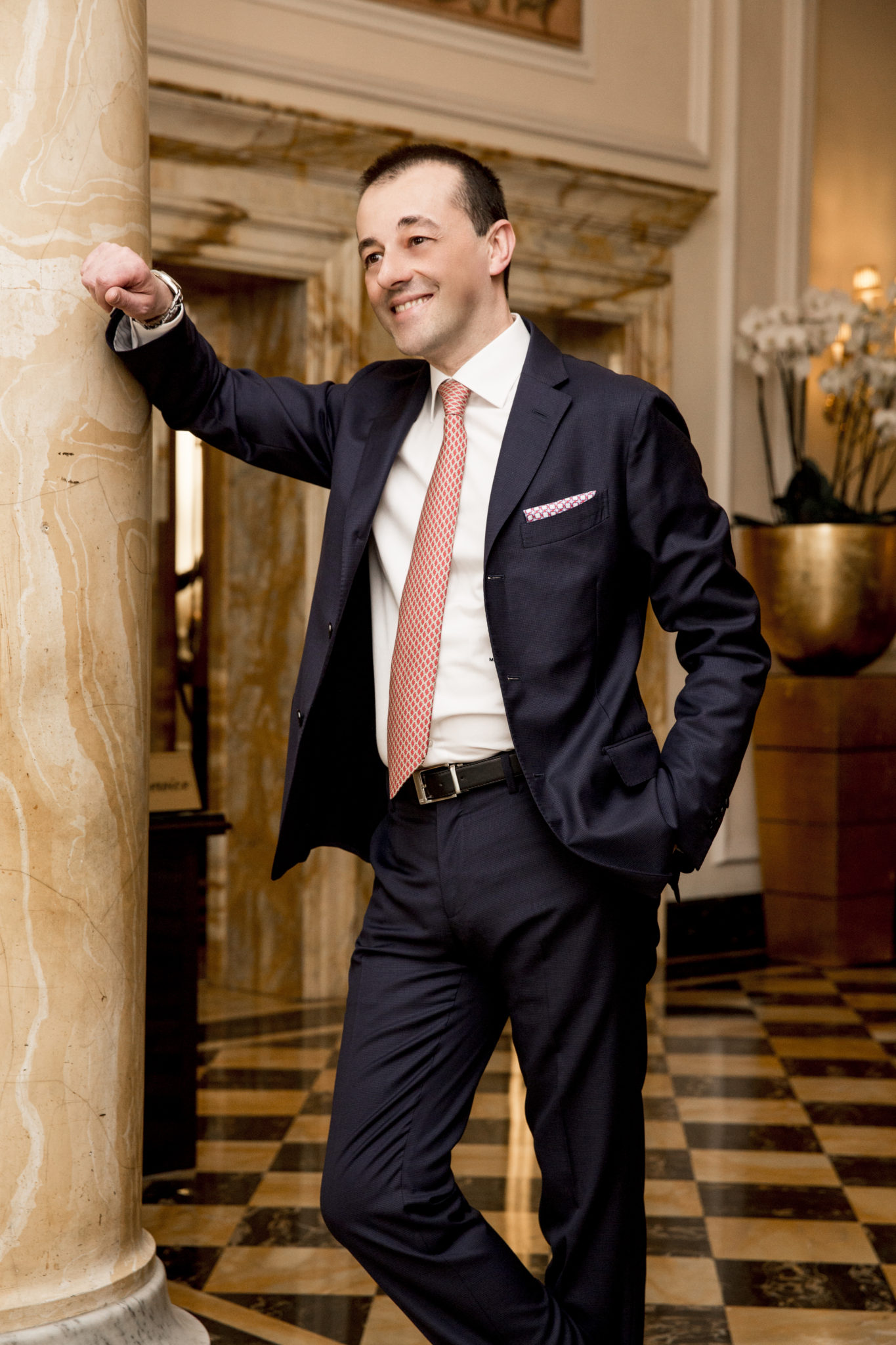 When the Queen decided to  move into her newly renovated residence, she graced the hotel with the name “Regina,” or Queen in Italian. The magnificent, old-world building was constructed in 1892,considered a triumph of Italian art deco style, decked out with an abundance of marble, brass, bronze and velvet. Mainella loves the decadent experience his guests enjoy here. 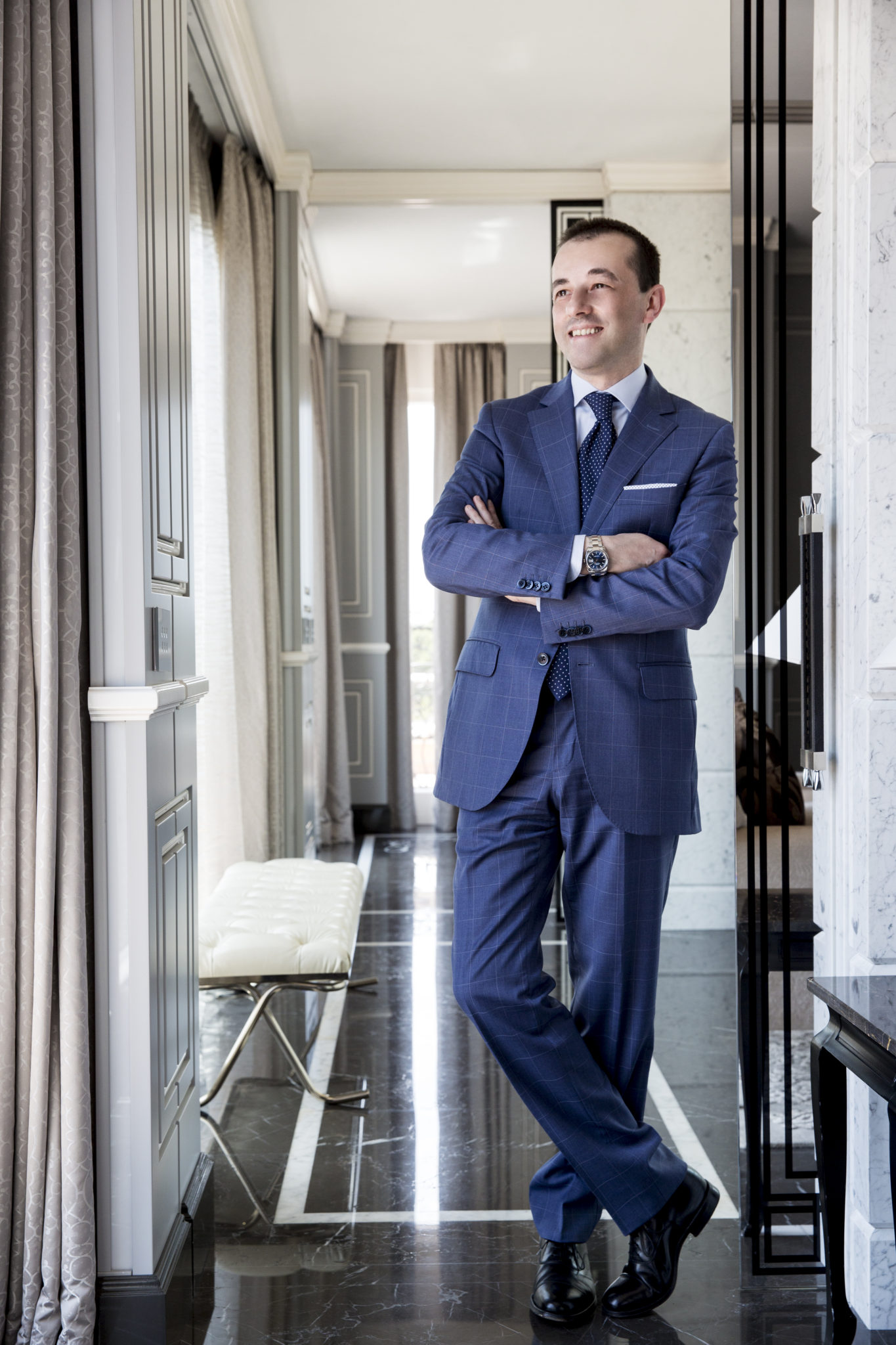 In the Roman Penthouse, you can’t help but smile as you admire the view of the eternal city. Restored in 1987 by the Polito family, and officially named the Baglioni Hotel Regina, they maintained the original style and glamour, while updating details in the rooms and public spaces to make the hotel more glorious than ever. We swoon over the shiny portoro black and amber marble floors in the lobby, the two imposing columns, the enormous Murano chandelier, the historic staircase and art deco railing, naturally, the portrait of the hotel’s original inspiration, Queen Margherita. 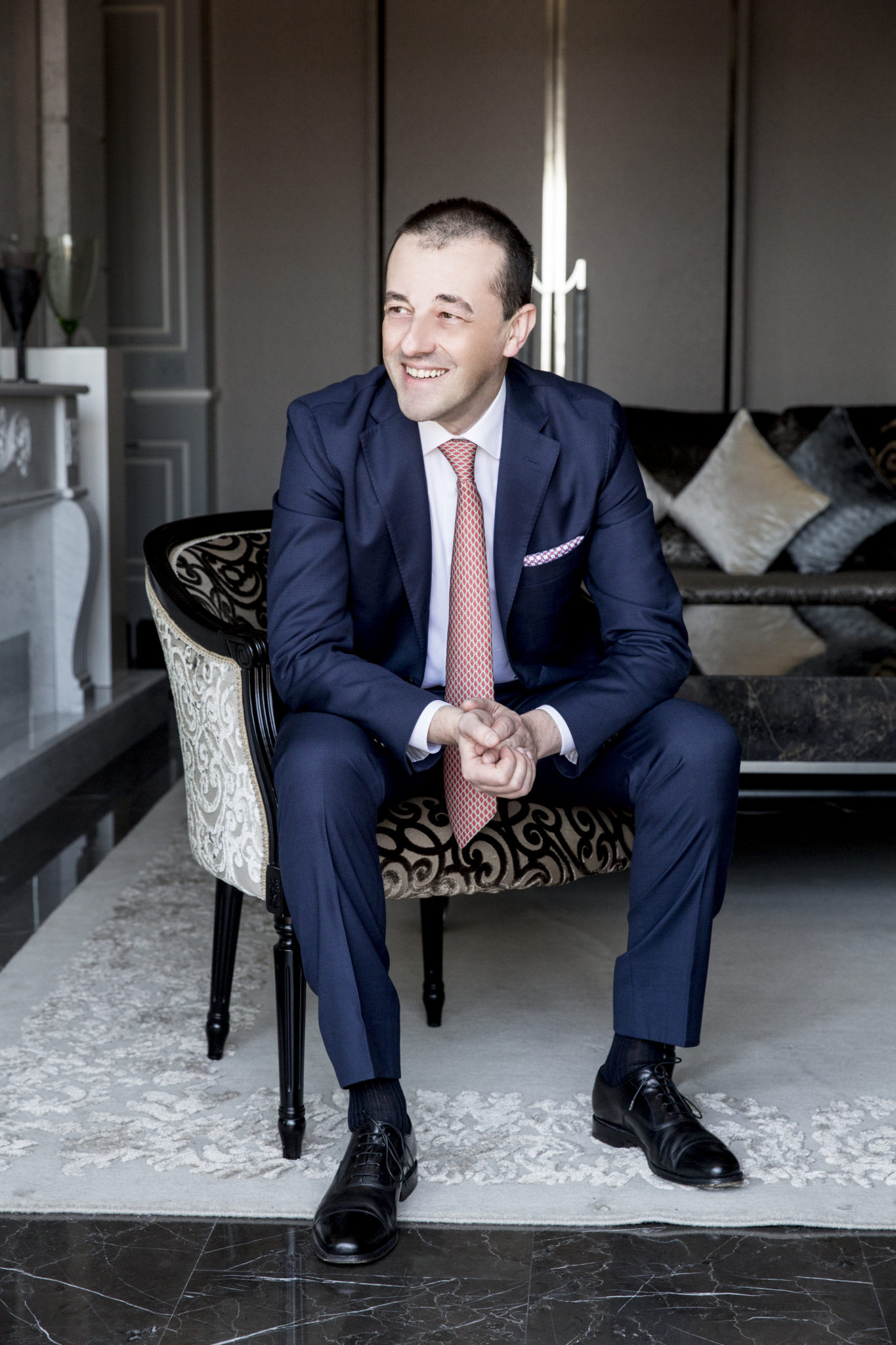 The hotel is known for its eclectic mix of styles, most notably the four Signature Suites: the Roman Penthouse (pictured above), Dolce Vita, Regina and Ludovisi. Detailed in Murano glass and decorated with contemporary interior design mixed with Moroccan lamps, fine woodwork from the 18th and 19th centuries, and precious textiles chosen personally by the Polito family, the hotel is infused with Italian glamour. 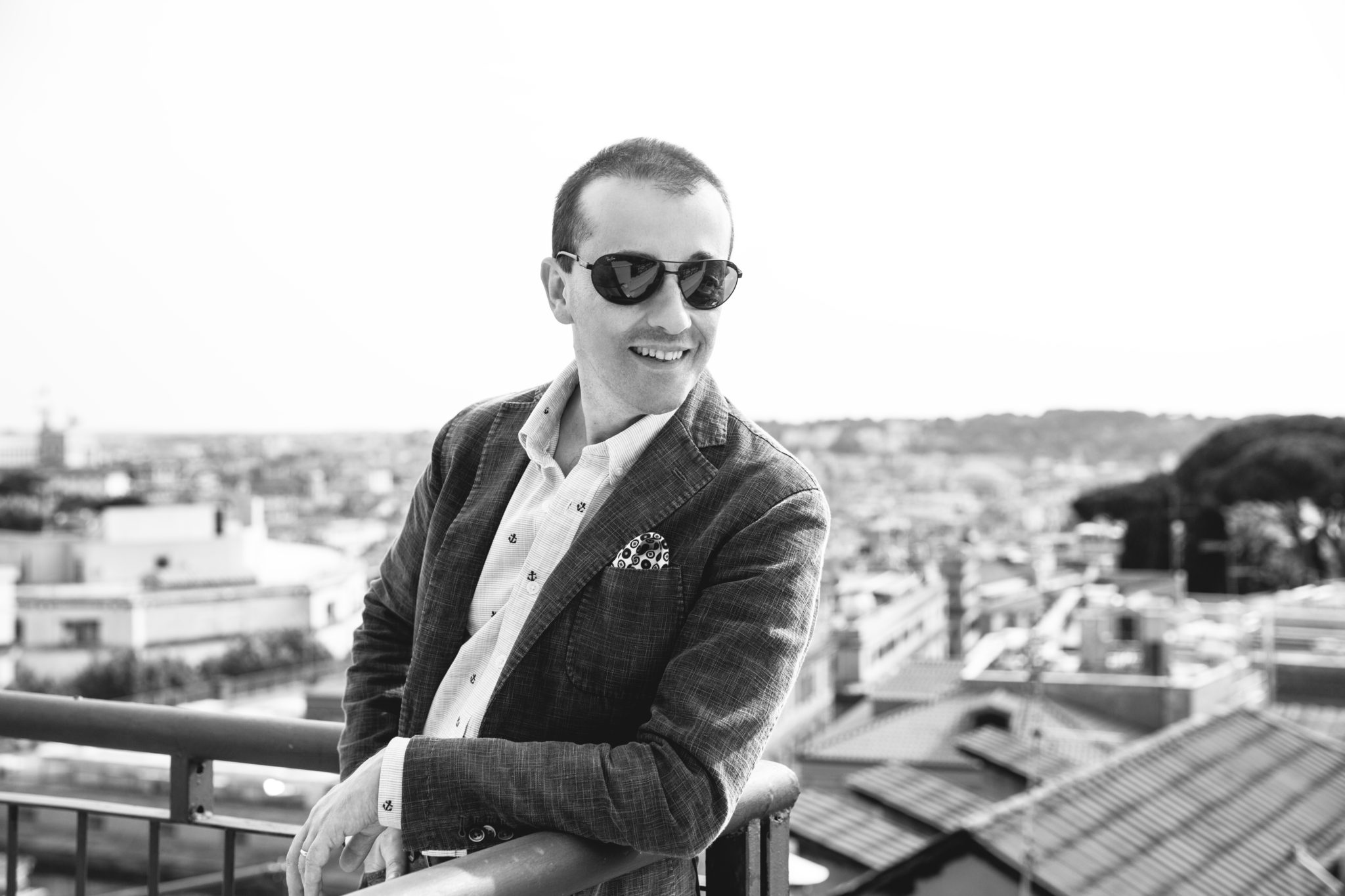 Leaning on the railing of the large private terrace of the Roman Penthouse, Mainella is dazzled by the view. It never gets old. 560 square meters, a three-level terrace and three bedrooms, the Roman Penthouse is one of the most impressive suites in the city. Located at a high point in the city, the balcony offers a 360° panoramic view of resplendent Rome. The master bedroom is glassed in on three sides, inviting guests to gaze out on the capital while relaxing in bed. 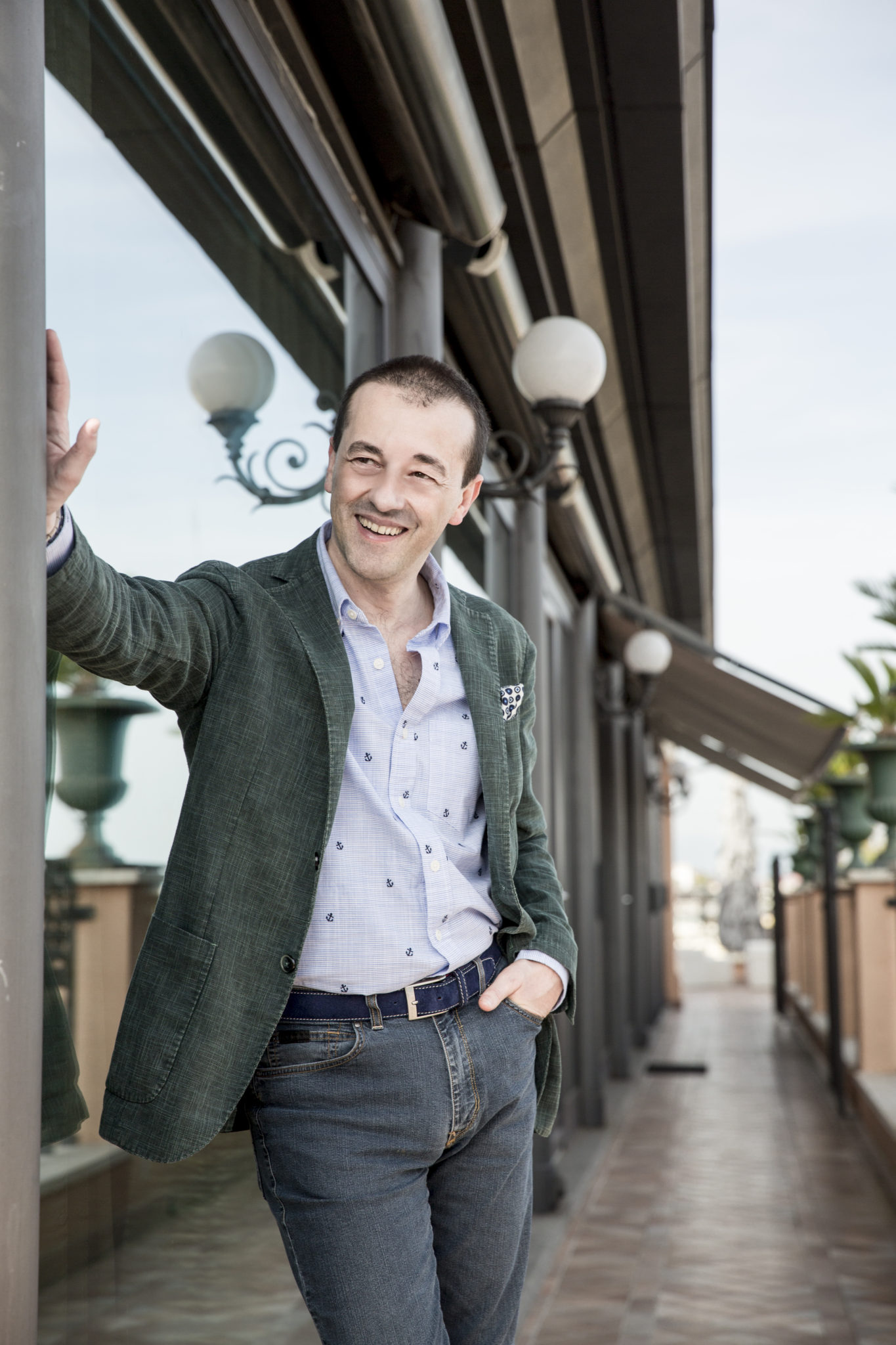 But, it isn’t all about the enchanting panorama over the Eternal City. Oh wait – maybe it is. It’s a view that will make you long to stay in your room. Pictured above, Mainella lounges on the breathtaking private terrace of the Roman Penthouse, soaking in the sights and planning his day. 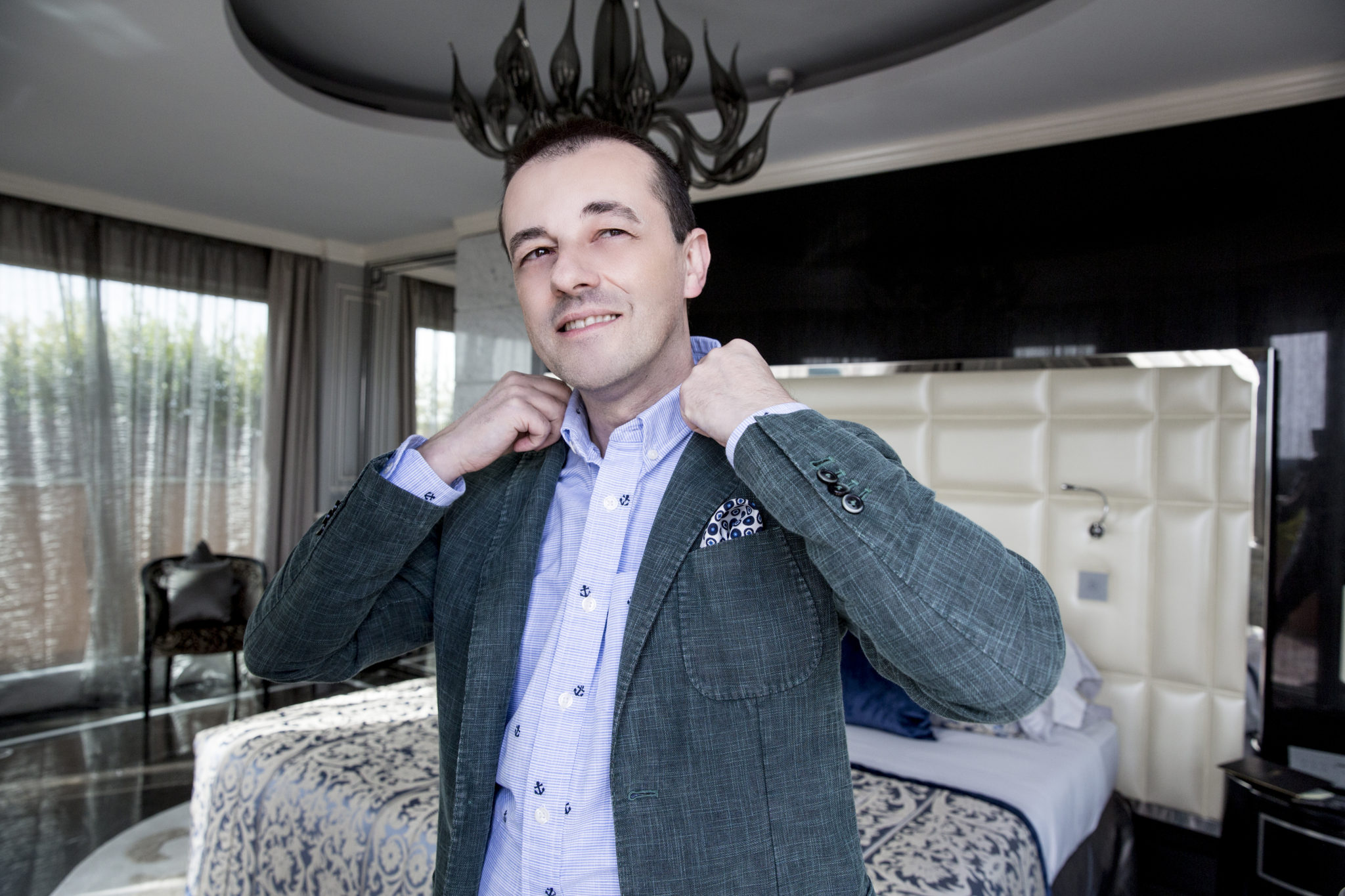 The suites are exquisitely outfitted in a collection of modern hand-blown glass chandeliers, crafted by Murano’s glass masters. A black marble bathtub with golden mosaics, a private workout space, and a covered outdoor Jacuzzi are just a few of the amenities that took our breath away. Contemporary design objects from the Luxury is not a Waste project, headed by Vincenzo Basile and featuring limited editions of Enzo Mari, Donata Paruccini, Valentina Carretta, Giorgio Bonaguro, Alberto Meda, Donata Paruccini, Giulio Iacchetti, Giovanna Castiglioni, Francesca Giacomelli and other prominent 20th century artists, enrich the lavish luxe Roman Penthouse (master bedroom pictured above). Honored guests of the suite are additionally offered a butler, a dedicated chef and a barman. Talk about living in style! 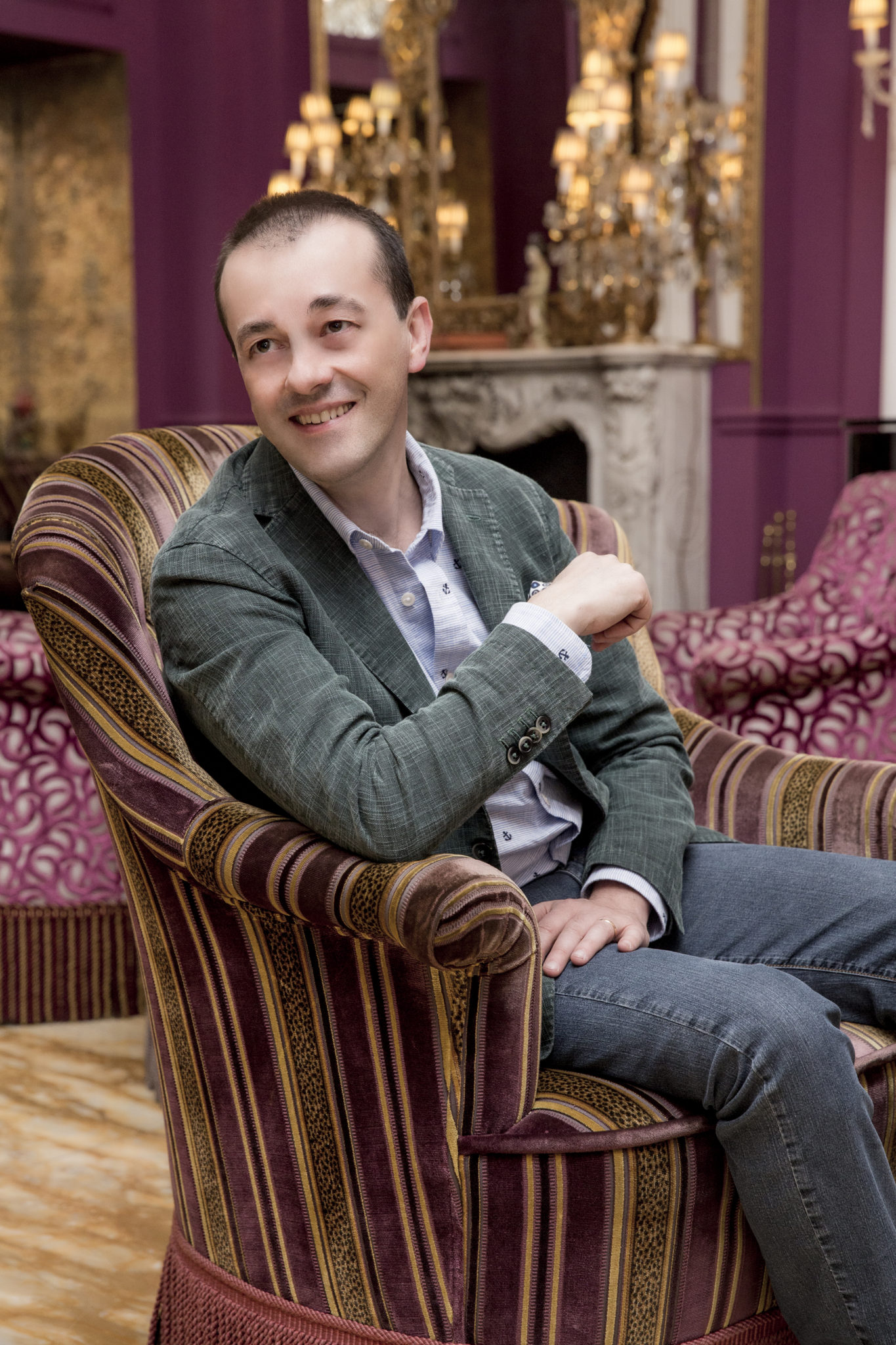 Mainella takes the time to kick back and recharge in elegant ambiance of the Art Deco Style Caffè Baglioni. In the first half of the 20th century, the hotel served as a gathering place for cultural figures, particularly Gabriele D’Annunzio. It’s not difficult to imagine Andrea Sperelli, the central character in his most famous novel, Il Piacere [The Child of Pleasure], inhabiting these sensational rooms. 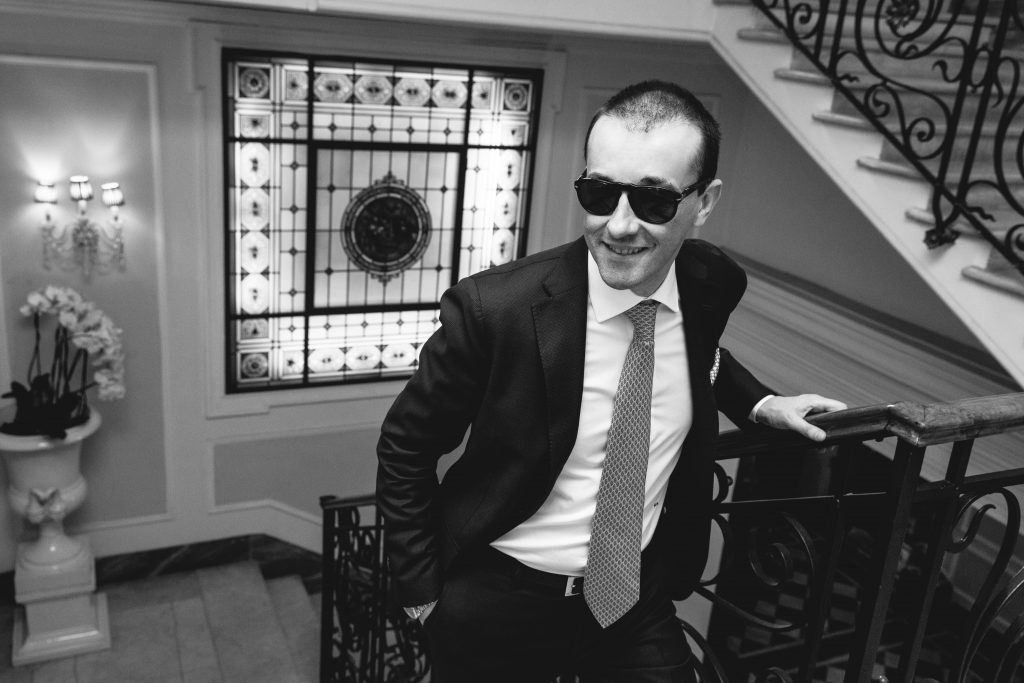 We were sad to wrap up our photoshoot with the equally photogenic and delightful Massimo Mainella, seen here on the celebrated original hotel staircase. The beauty of the hotel, it’s unique historic spaces and incredibly accommodating staff, made us feel right at home. 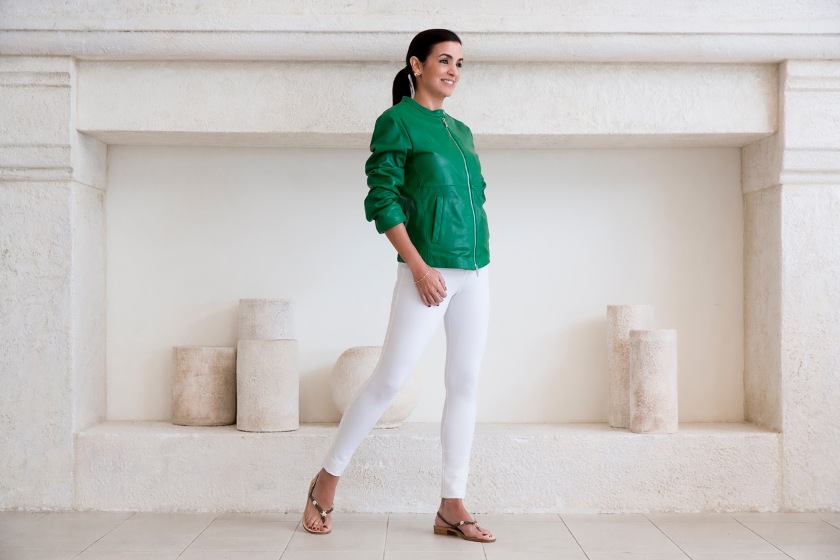 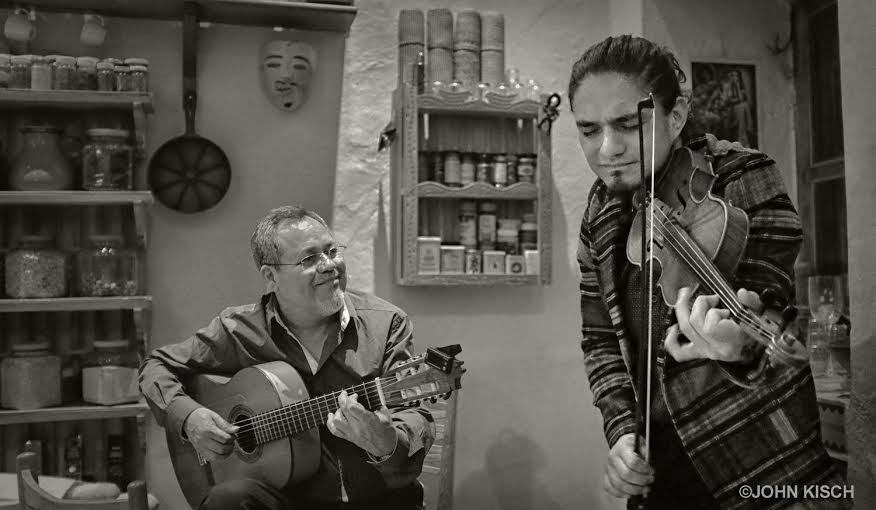 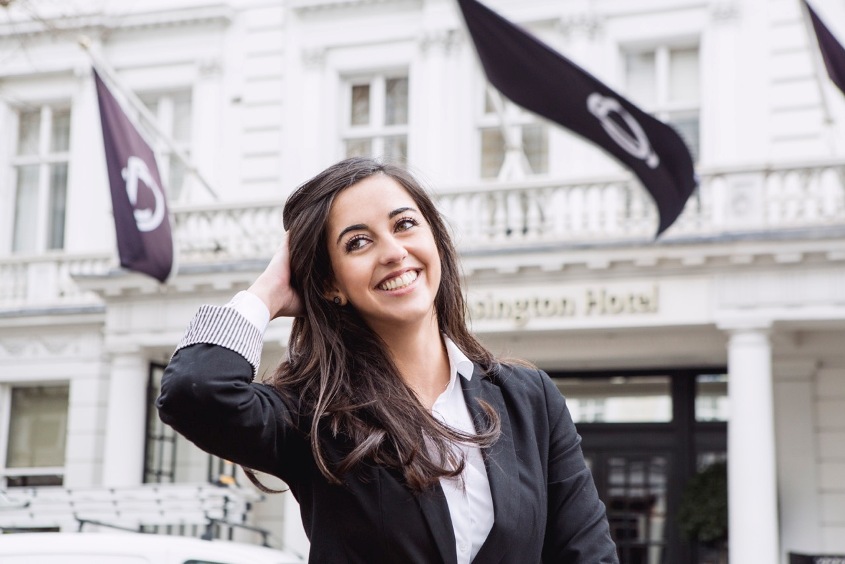